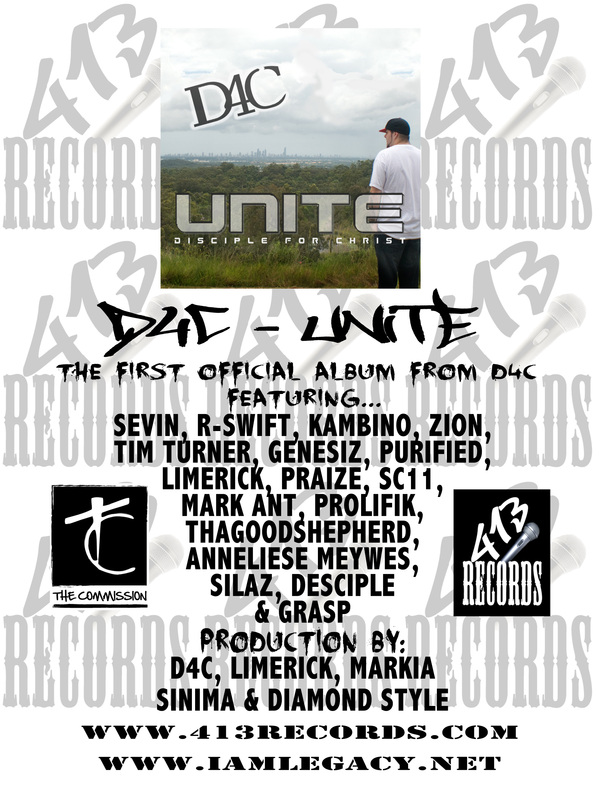 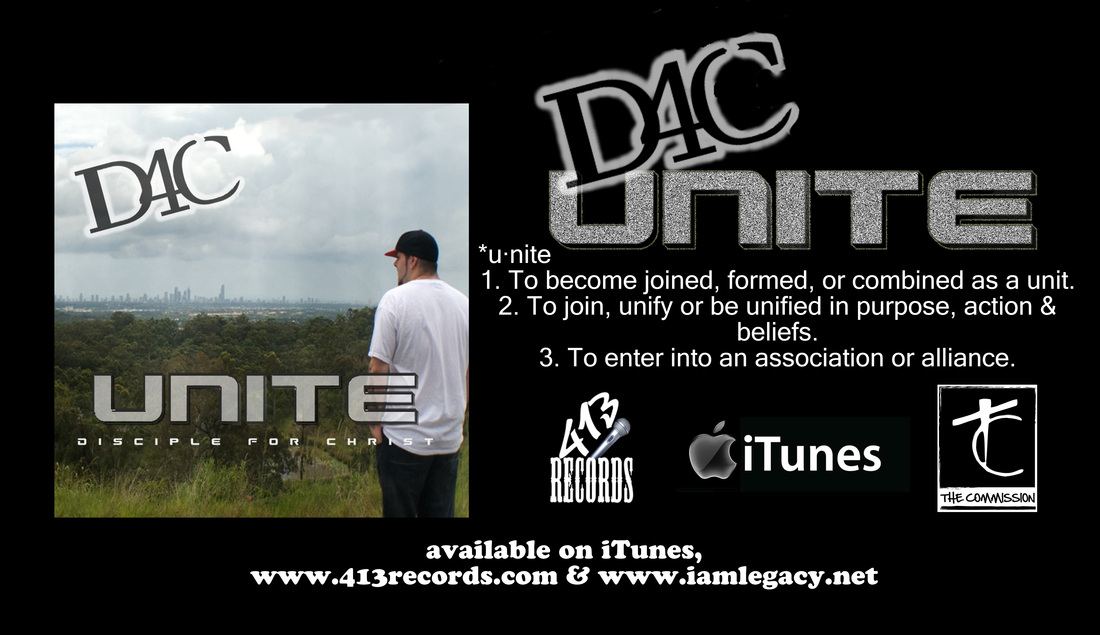 Check it out... featured on the Christian Hip Hop website www.HolyCulture.net!!!


CHECK OUT THE VIDEO BELOW!!!

Check it out... featured on the Christian Hip Hop website www.HolyCulture.net!!! 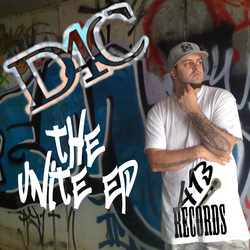 D4C has been hard at work getting ready to release his new album UNITE. But as a way of saying thanks to his supporters, he has made 8 new tracks just to give away as a part of his new Unite EP. So after touring around Australia with The Commission & Sevin, he got to work on the EP & it’s now officially out.

This year promises to be big for The Commission with several artists releasing new albums. Enjoy the EP and get ready for the UNITE album. It promises to raise the bar of hip hop in Australia

DATES OPEN TO THE PUBLIC: 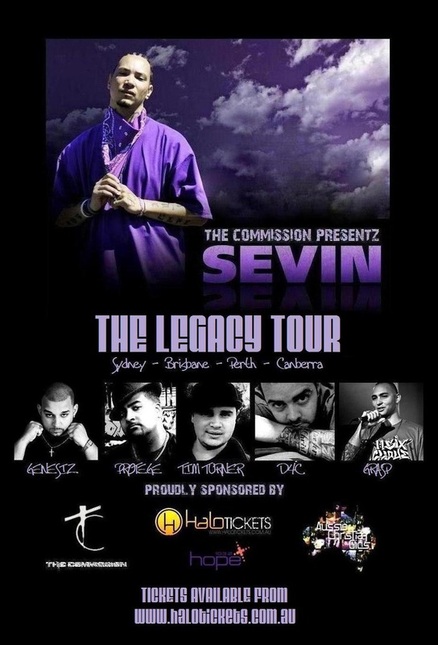 Sydney rapper Genesiz has had a great few years. He has become one of Australia’s most recognisable faces in positive hip hop. He has helped pave the way for others to do the same. He has released one of the highest selling gospel hip hop albums ever in Australia, having charted for three consecutive months at number 10 through his digital sales on itunes and Amazon through reverbnation. He has worked with big names and been a part of big things in the nation of Australia. But if you were to ask him about the vision in his heart, it goes beyond personal accolades and recognition. He has a vision, he believes is God given, called The Commission.

The Commission is the reality of a dream birthed in the heart of Genesiz in 2007. After the loss of two friends, one to cancer and one to suicide, Genesiz felt the urgency to spread a message of hope, legacy and truth. The result four years on is staggering. The Commission has shared their message with over seventy-five thousand people. They have performed at some of Australia’s biggest music festivals such as Big Exo Day. They have opened for some of Gospel hip hop’s biggest artists such as Lecrae. They have seen thousands of lives change as a direct result of the message they have continued to share everywhere they go. And they realise this is only the beginning.

Made up of Sydney rappers Genesiz and Protege, Queensland rappers D4C and Tim Turner, and Perth rapper Grasp, The Commission is quickly expanding and seeing their goal of positioning outreach teams in every state of Australia become a reality. They are not only entertainers, but they are ministers with their message being their sole focus, not their music. The Commission also run an arm of their organisation called HOPE. Through this, they provide opportunities for fans and listeners to sponsor children, donate to charity and help support great causes. Truly things are moving forward at a fast pace for The Commission.

2011 is looking to be a big year for them too. This year, from March 25th – April 16th, The Commission are fully funding their first national tour with international artist, and Genesiz good friend from Sacramento, Sevin. Sevin is one of the most prolific lyricists of our time. He has worked with and garnered respect from Snoop Dogg, Wyclef Jean, Lupe Fiasco, Quincy Jones, Xzibit, E-40, Too Short, Goldie Loc, Bizzy Bone & Bone Thugz & Harmony, Lecrae, Gospel Gangstaz, Bizzle and many more.

His ties to the street culture along with his spiritual aptitude create the perfect storm of authenticity, integrity and heart-felt passion that eludes many artists in the industry today. Sevin has chosen to be different. While most artists are promoting lifestyles that are driving millions of youth into an early grave, Sevin has pledged to use his talent to encourage our society, artist and consumer alike, to be more than just shallow shells of flesh willing to do “anything” to “get it”.  Instead, Sevin uses his story and experience to speak about real issues that affect our daily lives from a perspective that can relate to people in all walks of life.

Sevin began rapping in 1999 at age 18 and has travelled the world and worked with some of the biggest artists in music today. Aside from his incredible skill in rap music, Sevin is also a song writer, track composer, public speaker, and founder/leader of “HOG MOB”, an organization operating in 40 different cities and 3 different countries. HOG MOB spiritually encourages and physically helps people and has reached out to tens of thousands of people on the streets seeing thousands come to Christ.

The combination of Sevin and The Commission promises to be not only very entertaining, but edifying as well. Australia has never had a national hip hop tour with an international artist over such a long period of time as a month. This will be a first in the nation. But The Commission think it’s the first of many tours they will host. The future is bright and God is moving in the land down under.

If you live in Australia, don’t miss your chance to be part of this history making tour as Sevin and The Commission trek five cities in four states. Not only will they be holding main events in major cities, but their weeks will be filled with ministry at schools, juvenile justice centres, night clubs, churches and youth groups. For more info on The Commission and The Legacy Tour, visit their homepage www.iamlegacy.net 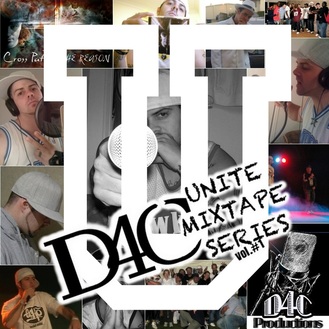 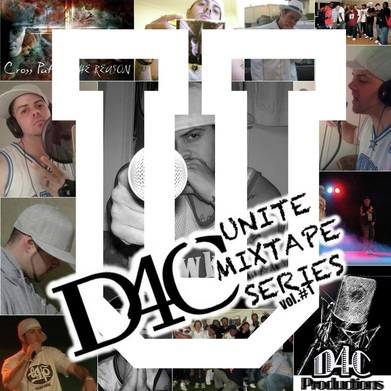 It is finally coming!!! The wait is over!!!
The "UNITE MIXTAPE SERIES" is finally about to begin!!! With 5 mixtapes in the series, this is gonna be a sweet collection of work by D4C!!
The first mixtape "U" Vol. 1... will be available for free download on 15th September 2010
So keep an eye out for it, as it's gonna be crazy!!!

Whatugot2lose?
Unbroken
Airplanes
Forever
Not Afraid
I Hear Them Calling
Hero
plus many more!!!

The download link will be made available on the day of it's release!!! 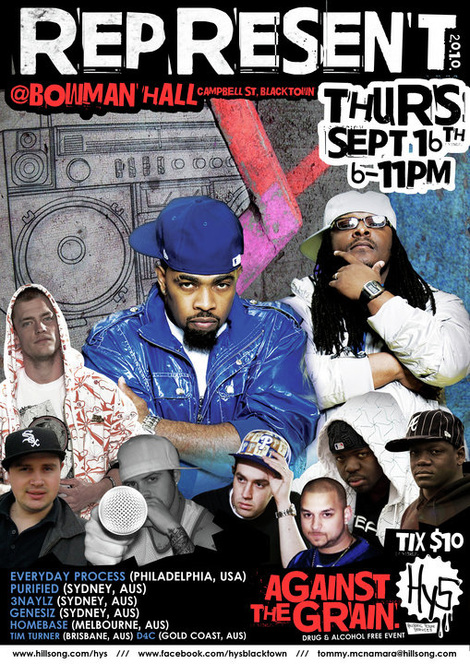 When we look at the current state of hiphop/rap, the style we see is glossed up, pimped out video clips with lyrics pushing sex, money, and power through intimidation and exaggerated stories to glorify destructive lifestyles, by rappers who frequently find themselves locked up for criminal activity, and in a whole host of young people we see these traits then duplicated in their lives – Speaking of this issue, a prominent hiphopindustry artist said this;

“It’s easy to operate behind a face of menace rather than a face of goodness. Because, you know, happiness and joy is viewed as weakness in this society… But I think that’s weakness.”
- Q-Tip (of A Tribe Called Quest)

In it's FOURTH year running, REPRESENT is a hiphop event like no other. our lineup of quality rap & hiphop represent not only great skills, talent and gifting, but far more importantly the greatest message that those gifts could ever articulate over a beat, the positive, yet hard-hitting and impacting message of Faith, Hope, and Love.

Proudly presented once again by Hillsong Youth Services [HYS] & Hillsong Youth, in conjunction with Youth Alive NSW & BIGEXODAY '2010, this year REPRESENT.2010 hosts some familiar local and international faces, along with performers who are fresh to the line up!

With these artists and more to be announced, another year of urban culture and amazing giveaways, and for a ticket price of ONLY $10, circle the date in your calendar, in your Moleskine, or on your iPad and set aside your cash, maybe even save enough cash to bring your friends along!

If you need more information, don't hesitate to email, call, or Facebook for anything you need to know.

Hope to see you & your whole crew there!

Hey all friends, fans and family!!

It is finally here!!! The time has come!!

The hard work has paid off....

We're proud to announce the official Album Launch for...

Gonna be an amazing night!!!

It it graciously being held at....

Come to an amazing night full of R&B and Hip Hop, including dance crews, performances and CROSS PATHS doing their thing!!!

Definitely not a night to be missed!!!! Come support some local Gold Coast talent!!!!

The CD will be available for purchase on the night for only $20, which includes a 16 page booklet featuring all lyrics to all 16 songs, amazing artwork and a LIMITED EDITION sticker!!!!

SO INVITE YOUR FAMILY, YOUR FRIENDS, YOUR CLASSMATES, YOUR WORKMATES, YOUR NEIGHBOURS!! ANYONE!!

Gonna be an amazing night!!

P.S... As this will be a church youth event, if you are an adult and visiting, a blue card may be/is required! But you can message me for further details!

D4C PERFORMING AT GENESIZ'S ALBUM LAUNCH DOWN IN SYNDEY IN FEBRUARY!! 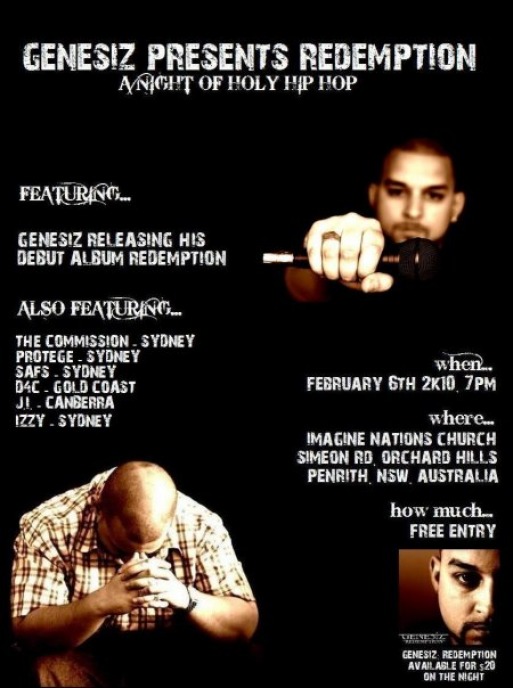 Thats right!!! D4C from Cross Paths has been asked to perform down in Sydney at this amazing event!! Of course, he took the offer straight away!!!
What an amazing opportunity and outstanding door opener from the Lord above!! Wish him luck on his trip down to perform and meet other fellow artists preaching the Kingdom with their music! He is very excited and can't wait to meet everyone and get to know them from a personal face to face standpoint, not just online!! This amazing event is on Saturday 6th of February 2010. It is being held at Imagine Nations Church, Simeon Rd, Orchard Hills, Penrith, NSW. Starts at 7pm!! If you're down that way.... YOU DONT WANNA MISS IT!! God bless