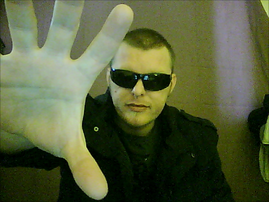 Limerick was born and raised on the Gold Coast, QLD in a single mother home with three brothers. At the age of 14, Limerick started writing poetry and hip hop to help deal with the struggle of growing up in a lower class fatherless home and was influenced by artist like 2pac and Bone Thugs and Harmony.

On September 30th 2001, two weeks after the 9/11 attacks... Limerick became a Christian at his brothers church and started performing for local churches to spread the gospel and glorify our Lord Jesus Christ. In 2009... Limerick featured on Cross Paths album, "The Reason" and in 2012 will release his first solo album called, “Walking Through Shadows” on 413 records.

Limericks music focuses on the hurt and pain we go through living in a fallen world.

He writes about grief, poverty, violence, injustice, social issues, doubt and faith in God from a Christian world view. Limerick desires to shine the light of Gods Word and truth in a dark world that’s dyeing for answers. Limerick also desires to share his heart to Christian and non-Christian alike. Limerick brings a unique style by using poetic lyrics to express his thoughts, feelings and hope in the Saviour Jesus Christ.